A view of the world economy in January

Since 1980 the yield curve has accurately predicted the last five US recessions. After nearly a decade of economic expansion, is it telling us that another one is on its way in 2019?
The yield curve has been a reliable predictor of US recessions over the last four decades. Each time the yield curve has inverted, the US economy has entered a downturn within 18 months. At the start of 2019, the curve is precipitously close to inverting again.
The yield curve is the difference between the interest rate on a longer-dated bond (debt issued by a corporation or country) and a shorter-dated bond.
For instance, typically it should cost less to borrow money for two years than for 10 years. This is because the economy is expected to grow over time and experience inflation. Inflation erodes the fixed return of a bond and investors tend to want compensation for taking on that risk. They therefore demand a higher yield for longer-dated bonds.
However, when it costs more to borrow money in the short term than it does in the long term, the yield curve inverts. At best, an inversion suggests that investors expect the economy to slow, at worst it signals a recession could be on the way.
What is the US yield curve telling us?
In the chart below, the blue coloured line represents the difference between the interest rate on a 10-year Treasury, which is a US government bond, and a two-year Treasury on a quarterly basis since 1980. The orange coloured line shows quarterly US GDP over the same period.
The yield curve has inverted, dropping below zero, five times in the last four decades and each time a recession has followed.
The last two times the yield curve inverted, in 1998 and in 2008, the debate among economists was whether this time would be different. In both cases, it wasn’t. In 2019, the curve is the closest it has been to inverting since 2008. 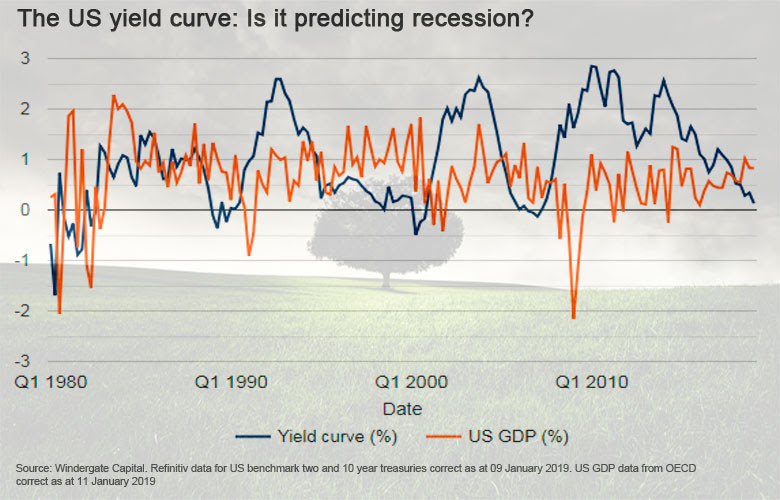 Is the US heading for recession?
In raising its benchmark interest rate, the Federal Reserve (Fed) has put pressure on other short-term rates, resulting in the US Treasury yield curve being close to inverting as we start 2019. The yield curve is just one leading indicator of a potential recession, however, and just because it has been a precursor to sustained downturns in the past, this does not mean that it will necessarily be the case this time.
What really matters is how the Fed responds to the yield curve development and other key macroeconomic data over the next few months.
We expect a gradual slowdown in US growth in 2019 and 2020. The emphasis is on the word gradual: they do not see a recession as likely in 2019 (although not inconceivable in 2020) as many of the forces that led to strong growth in 2018 are still in play. The slowdown, however, means that an end to the cycle of rising interest rates is in sight. We think interest rates could peak at 2.75%, which is modest compared to past economic cycles.

Euro could have a cold June

Chart of the week: Not quite a China shock

EconomicsChart of the week: Not quite a China shockCoverage of China's 2018 growth rates is overly pessimistic Right after China released its 2018 growth figures, negative headlines started to pour in – some calling the numbers "shocking" and some talking about a...

Past performance is not a guide to future performance and may not be repeated. The value of investments and the income from them may go down as well as up and investors may not get back the amounts originally invested. All investments involve risks including the risk of possible loss of principal.

For all other users, this content is issued by Windergate Capital Management Limited, 29 Gresham Street, London, EC2V 7QA. Authorised and regulated by the Financial Conduct Authority.